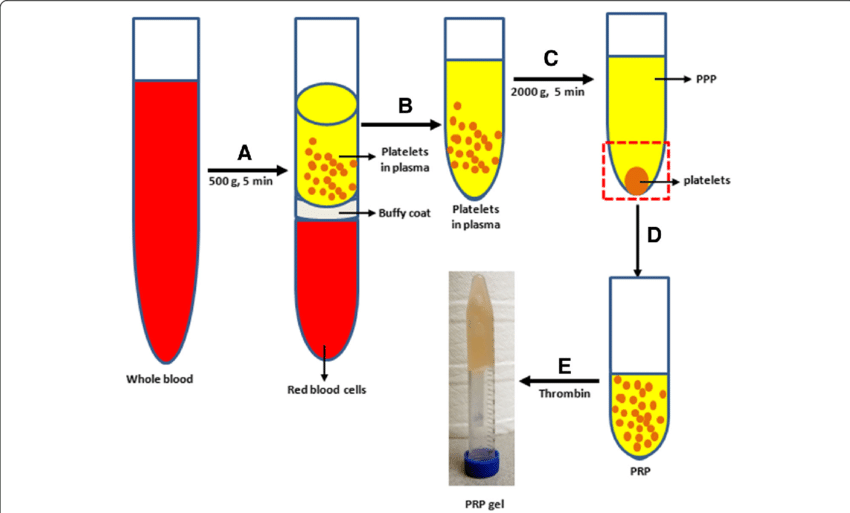 PRP is obtained from a sample of patients’own blood drawn at the time of treatment. A 30-40  cc venous blood draw will yield 3-5 cc of PRP depending on the baseline platelet count of an individual, the device used, and the technique employed. The blood draw occurs with the addition of an anticoagulant, such as citrate dextrose A to prevent platelet activation prior to its use

In the PRP method, an initial centrifugation to separate red blood cells (RBC) is followed by a second centrifugation to concentrate platelets, which are suspended in the smallest final plasma volume. WB (whole blood) is initially collected in tubes that contain anticoagulants. The first spin step is performed at constant acceleration to separate RBCs from the remaining WB volume. After the first spin step, the WB separates into three layers: an upper layer that contains mostly platelets and WBC, an intermediate thin layer that is known as the buffy coat and that is rich in WBCs, and a bottom layer that consists mostly of RBCs. For the production of pure PRP (P-PRP), upper layer and superficial buffy coat are transferred to an empty sterile tube. For the production of leucocyte rich PRP (L-PRP), the entire layer of buffy coat and few RBCs are transferred. The second spin step is then performed. ‘g’ for second spin should be just adequate to aid in formation of soft pellets (erythrocyte-platelet) at the bottom of the tube. The upper portion of the volume that is composed mostly of PPP (platelet-poor plasma) is removed. Pellets are homogenized in lower 1/3rd (5 ml of plasma) to create the PRP (Platelet-Rich Plasma).